In May, we did our biannual campaign to ensure that all children in village were caught up on a trifecta of vaccinations/medicines: Vitamin A for vision, Mebendazole to de-worm, and measles (rougeole).  This involved a lot of walking en brousse to the area nursery schools (écoles maternelles). 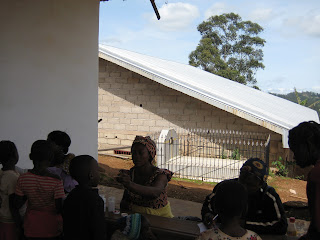 No sooner had I gotten settled into Bapa when it was time to leave again – this time heading for the Southwest region to collaborate with another volunteer and teach First Aid.  Our first presentation was with the drivers and other support personnel for the Cameroon Baptist Convention, a health organization.   The next day, we did the same for the men of HADY Guiding Service, a company that provides guides and porters for Mount Cameroon.  It was a welcome relief to get to teach something I feel confident in sharing – especially because I could do so in English! 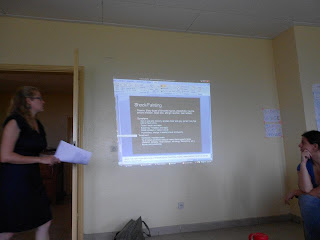 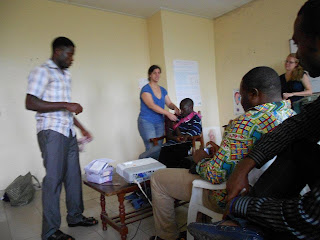 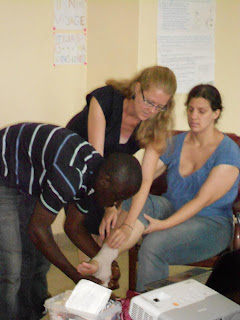 Because my work there fell on the 5th of May, I got to crash that region’s Cinco de Mayo party which featured the typical spread of Mexican-like food, as well as a homemade piñata!  Later, the party moved to a middle-of-nowhere karaoke place where the entertainment continued.  There was a pretty impressive selection of songs to choose from, and the volunteers held their own in taking center stage.  (Although, perhaps even funnier were the Cameroonians who didn’t know the words to the songs and decided to just make up their own lyrics.)

For the monthly Vaccination Day presentation, I decided to tackle Family Planning and was so grateful to have a fellow volunteer come to provide her expertise with introducing the topic.  Reproductive Health is a big issue throughout Africa, and my village is no exception.  Generally, women don’t understand their own bodies – let alone that they can have some control over when they get pregnant.  Combine that with the cultural push to have large families, and you end up with women routinely having six or more children back to back but not the economic means to provide for them.  It’s a sensitive issue, and the best approach is to explain that you’re not trying to necessarily limit the size of the family.  Rather, that by planning, births can be better spaced - a win-win situation for mother/father/child/community.  The presentation went well and the audience was engaged asking questions as they learned – many for the first time – about their anatomy and how various contraceptive options work.

At the normally unproductive monthly Health Club meeting at the high school, I was surprised to learn that a Bafoussam NGO, CIPCRE (Cercle International Pour la Promotion de la CRÉation), was scheduled to attend.  After discussing their organization with the students for a little bit, we surveyed the land around the school grounds for a projected garden/tree nursery (jardin/pépinière).  I was unsure about the funding and other logistics, but was excited that we had a concrete plan to do something. 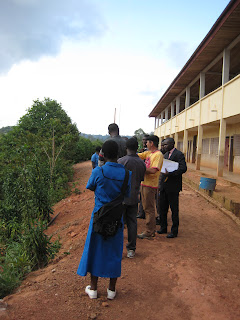 Sure enough, they returned a few weeks later for a work day.  Although some students were busy with their end of the year exams, we rounded up enough people and started breaking ground.  It was a little unorganized and confusing as we were dealing with three separate plots, but it all came together.  I dug right in (pun intended) and got my hands – and legs/knees/feet – dirty helping to dig trenches for the trees, adding compost and mixing in fertilizer before plopping the saplings into their new homes and tenderly covering their fragile roots.  By the end of the day, we had planted 860 trees around the high school that will hopefully help with erosion control.  I was proud of the kids that stuck around for the full day of work and was glad that I had made 4 banana breads the night before so I could share some small refreshments to thank them for their efforts. 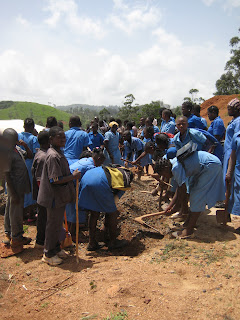 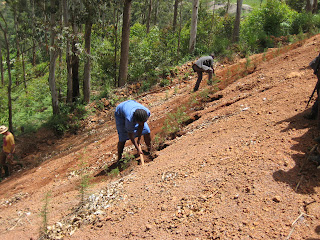 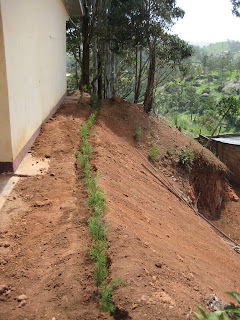 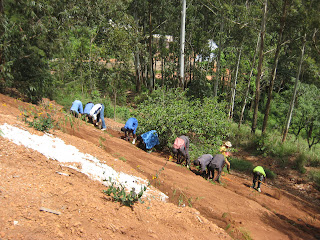 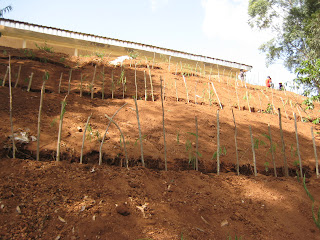 Much of the rest of the month involved working at the library, attempting to organize the books that had been received during Phase I of the Books for Cameroon project – and trying to install those given during Phase II.  The shelves were dirty and the books stacked incomprehensibly, but I actually had fun blaring music and cleaning/re-shelving/alphabetizing/creating a card catalog.

After much planning with Peace Corps administration, we also finally put together a regional training for volunteers and their counterparts.  The Men As Partners strategy is a recognition of the fact that, although many development initiatives are focused on empowering women, in many countries men are the ones who have the decision-making power in partnerships when it comes to sexual relations and reproductive health (when to have children, whether to seek health care, or whether to use protection during sex).  The curriculum encompasses many topics ranging from Gender/Sexuality and Health/Reproductive Health to Substance Abuse, Healthy Relationships, and Fatherhood.  I brought the nurse from my health center because she is dynamic enough that I had confidence that we could work together to educate the men in our village.  The material presented was interesting and the seminar was actually surprisingly fun (how often do you get to say that about a conference?).  On a personal note, being put up in a hotel (i.e. warm, running water and television) with a bunch of friends for a few days was pretty nice, too. 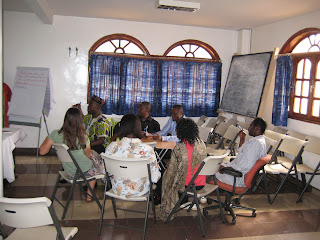 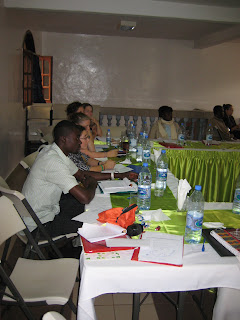 May 20th saw another National Day come and go.  Essentially Cameroon’s Independence Day, it’s sadly one of my least favorite events in country.  It involves the requisite marching and skits/songs, but they cluster the celebrations in the districts which means, rather than just being surrounded by the people in my village who know me, I feel more on display to strangers.  I knew I didn’t want to spend the day seated up front with all the grands, so I bowed out saying that I wanted to be able to walk around and take pictures.  It wasn’t a complete lie… 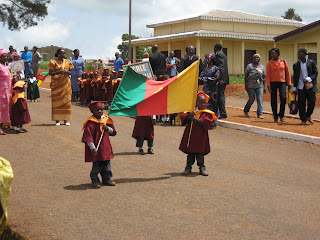 I rounded out the month with another soy demonstration in village.  Due to miscommunication (and admittedly, my lack of confidence that all the necessary parties would follow through) we wound up with nearly 6 kilograms of soy to prepare!  This was double the amount I normally work with during a presentation, so it was twice as time consuming.  So, while we sat around waiting for the milk to boil, we covered the usual topics of nutrition and talking about all the benefits of soy.  Then, they decided to tell me about another pressing issue.  After a year and a half in village, I felt like I had a pretty good grasp on a lot of the major problems – but also recognize that there’s always something new to learn as the “outsider.”  What was their concern?  They were upset with the condition of their breasts.  Yup…  As it turns out, saggy boobs (or, breasts that fall - seins qui tombent) are really worrisome to the women (and men).  They explained that, after breastfeeding, they find their ladies aren’t so perky.  Not only does this make them feel unattractive, but it has larger cultural implications.  This was shocking to me since, after seeing breasts day in and day out in public during breastfeeding, I wouldn’t have assumed they’re a body part that is as sexualized as they are in America.   However, the women said that it leads their men to stray, and the men nodded in agreement.  We chatted again about the number of children that women typically have, and I again pointed out that better spacing of these births allows the body a much-needed rest in between.  They were dismissive of this rationale, explaining that this happens to women even after the first child. I also talked about the type of work women do.  Fieldwork is all subsistence farming, bent over close to the ground for many hours doing the labor with hand tools.  Further racking my brain and thinking on my feet, we had a conversation about the lack of proper support. Many older women don’t wear a bra, and those that women do purchase here are normally the cheap second-hand variety found in the open air markets.  They said that this isn’t even a problem American women deal with and I countered that yes, actually, changing muscle tone and loss of elasticity in the breast is an inevitable part of aging.  However, we’re often able to “hide it” longer with bras that bind and lift.  Just another day in culture sharing…

Hmmm…food.  I suppose my new guilty pleasure has been buying cheese whenever I go to Bafoussam.  Spicy bean sandwiches have always been great, but add a bit of cumin gouda?  Fuh-get-ah-bout-it (Fuh-“gouda”-bout-it?  Too easy…).  I’ve also been trying my hand at homemade falafel and pita.  It’s actually not too difficult so I plan on making it a more routine dish in my normally predictable repertoire of meals.  While exploring our regional capital, we also stumbled upon a swanky hotel with an official-looking sign advertising an ice cream shop.  Our hopes were dashed though, when we entered and found a dapper Cameroonian wearing a bow-tie - but no ice cream.  I suppose it’s for the best…  Also, I gave taro and yellow sauce another try after my less-than-impressive experience with it the first time around in January 2011.  As it turns out, it was pretty good.  Kind of like lumpy mashed potatoes with a creamy, salty gravy.  I guess it just goes to show you that sometimes first impressions can be deceiving.
Posted by Charmayne at 3:55 AM

*Number letters so that I can determine whether any do not arrive.

*Packages should be sent via air mail (not surface mail) using a flat-rate USPS box - the smallest size costs $13 to send to Cameroon.

*Do not send anything of significant value for fear of damage or theft along the way. Theft is less common if you mark the packages in red ink, put religious symbols on the outside (draw crosses, “Jesus fishes”, Bible verses), and/or address it to ‘Soeur/Sister Charmayne Cooley.’

*Packages take approximately 1 month to arrive. Anecdotal evidence also suggests that insuring it - no matter the contents - also increases the likelihood of arrival.

The contents of this website are mine personally and do not reflect any position of the U.S. Government or the Peace Corps.